The Longest Straw draws a connection between the water that supports a city and that water’s source. Samantha Bode, director, moved to Los Angeles and immediately fell in love with the abundant sunshine, the warm air, and the exotic plants of Southern California. But, she noticed within the city of Los Angeles the plants were very much like her native North East Pennsylvania. Green grass and tall trees grew everywhere, but there was no obvious source of water and it rarely ever rained. Where did all the water come from?

Samantha embarks on a journey up the Los Angeles Aqueducts and the Mono Extension, the original source of Los Angeles’ imported water. During one of the worst droughts in California history, Samantha laces up her

boots and sets off at the Los Angeles Aqueducts Cascades in Sylmar, CA. The audience follows her north and east for 65 days as she struggles through the rugged terrain of the Mojave and Great Basin deserts and loses herself in the shadow of the Eastern Sierra Nevada Mountains. She speaks with historians, community leaders and local residents, as well as employees of the Los Angeles Department of Water and Power (LADWP), the operators of the city’s aqueduct. Through Samantha’s inquisitive nature, the audience gains a deeper understanding of the economic, ecological, and societal impacts of water importation and deportation on communities, as well as the future of Los Angeles’ water.

black water education and treatment. The aqueduct can be viewed as a microcosm for ecological and resource struggle around the world. Too often in the world of instant gratification humans mistake temporary abundance for never-ending supply. The Longest Straw heightens awareness that the resources that civilization uses to thrive and survive are often shared by various communities; human, animal, and plant. By working together, humanity can ensure the future of reliable freshwater for all.

***Please note: We have changed our location to one building north of 117 Bimini in the north end of Los Angeles Eco-Village ***

GETTING HERE:
Please walk, bike or use our multi-billion dollar transit system.

Driving? Parking may be difficult.

Biking?  Please park your bike inside the yard at the event space

About Samantha Bode:
Sam  is a film and television maker and lives in the Los Angeles Eco-Village where she actively demonstrates low impact living patterns and a high quality of life. Throughout the 10 years of her career, she has had the wonderful opportunity to be creative in a range of programming, from shows about Africa and it’s descendants, to short news pieces produced by at risk youth in the Los Angeles area, to documentaries about creating your own reality through open source projects and urban farming. The Longest Straw is her first film directing endeavor and is winner of the 2017 New Urbanism Film Festival Best Healthy Cities Film. When not making films or attending Eco-Village meetings, Sam can be found exploring the vast landscapes of  the American west and south west.

Los Angeles Eco-Village is celebrating its 25th anniversary all year long.
Plan to attend more events featuring the work of our  creative and activist members.

As many of you know, LAEV has a long history of traffic calming activities. Tea in the intersection of Bimini and White House Place was a fairly frequent traffic calming activity back in the early to mid 1990s.  In those olden days, we did it just to meet neighbors who were always in their cars.  They would slow down and roll down their windows and ask, “What are you crazy people doing in the middle of the street?”

And we would enthusiastically reply, “Well we never get to meet you and other neighbors because you’re always in your cars, so why don’t you park and come have some tea with us.”  And often they did.

Now we have an equally important reason for neighbors and friends to come have tea with us in the intersection:  we want you to sign our petition to get big polluting delivery trucks to relocate their delivery service on Vermont instead of Bimini.  Often these trucks are lined up 3 and 4 at a time on Bimini with engines running, waiting to get into the Bimini-facing delivery dock for Seafood City.

Please bring your own cup.  We’ll provide the tea, sun shade, and cookies.

Los Angeles Eco-Village is celebrating our 25th Anniversary all year long:  1993 to 2018.  Come hang out with us and share your stories about your experiences here.

Free admission, NO reservations needed.
Refreshments.
Come celebrate the conclusion of this 8 week workshop and the beautiful work of the participating children.

Explorations in Nature is a unique 9 week art program for children 3 through 8 and their parents or guardians that use the visual arts to develop deeper connections between children and their experience of the natural world.  This program is made possible in part by a grant from the City of Los Angeles, Department of Cultural Affairs and CRSP in association with the Urban Soil-Tierra Urbana Housing Co-op and the Beverly-Vermont Community Land Trust.

Led by Artist in Residence Sylvette Frazier, creator of Connecting Children to Art in Nature, classes feature emphasis on creating art in an eco-conscious format, culminating with a public exhibition and collaborative nature weave.

All welcome!  Children & Adults of all ages

This culminating public event and exhibition is made possibly in part from a grant from the City of Los Angeles Department of Cultural Affairs, in association with CRSP, the Beverly-Vermont Community Land Trust, the Urban Soil-Tierra Urbana Housing Co-op.

CicLAvia heads back to Iconic Wilshire Boulevard on December 10 as Koreatown, Westlake, and Downtown Los Angeles will host the country’s largest open streets event! Streets will be closed to cars and open for cyclists, pedestrians, runners and skaters to use as a recreational space.

Planning a feeder ride or walk and want to add it to our site? Email info@ciclavia.org!

New to CicLAvia? Here are some things you need to know for December 10th:

This Public Meeting is Regarding Contaminants and Proposed Remediation

Concerning the property at:

Previously known as Song’s Auto Shop
and the Teriyaki House

This meeting is a component of a proposal being prepared by the nonprofit property owner, CRSP, in the Los Angeles Eco-Village, for a US-Environmental Protection Agency (US-EPA) Brownfields Clean-Up grant.  A draft copy of the CRSP proposal will be available as noted below by November 10, 2017.  Your comments will be incorporated into the final grant proposal to the US-EPA and should be received by CRSP no later than November 14, 2017

A summary of the US-EPA’s “Analysis of Brownfield Cleanup Alternatives (ABCA)” and the alternatives for remediation of contaminants can be viewed on-line below.  The complete 43 page ABCA report can be viewed in hard copy at 117 Bimini Place, Lobby, Los Angeles 90004 or you can access it here.

A Plan for redeveloping the property includes car-free co-op oriented mixed uses, including an environmentally sensitive hostel, small green businesses  operated by neighbors within the Los Angeles Eco-Village on Bimini and White House Place or within easy walking distance. CRSP will also be continuing its co-op training and education programs on the site, including workshops on phytotechnologies for remediating brownfields.

In 2017, Weston Solutions, Inc. (WESTON®), performed a Phase II Targeted Brownfields Assessment (Phase II TBA) at 3554 and 3560 West 1st Street, Los Angeles, Los Angeles County, California (the Site). The TBA was requested by the property owner (applicant), CRSP, and performed under contract with the U.S. Environmental Protection Agency (EPA). The purpose of the TBA was to characterize conditions at the Site, because it is being considered for redevelopment.

Contaminants, including toxic heavy metals and petroleum hydrocarbons, were detected in surface soils and or soil gas
analyzed as part of the TBA work. This Analysis of Brownfields Cleanup Alternatives (ABCA) report identifies and compares different cleanup scenarios for the Site based on results obtained from the Phase II TBA (WESTON 2017). These scenarios are ranked on effectiveness, implementability, and cost.

The proposed redevelopment of this site will include an ecologically sensitive hostel with environmentally and co-op oriented mixed retail uses or services. Based on that proposed use, cleanup of the Site to standards suitable for a commercial-industrial use exposure scenario is recommended before planned re-use/redevelopment can begin.

The following concerns were identified during the Phase II TBA:

Cadmium was present at concentrations that exceed the specified human health screening levels for a commercial use exposure scenario in two surface soil samples collected from the southern portion of the Site.

Four semivolatile organic compounds (SVOCs) were present at concentrations that exceed the human health screening levels in a surface soil sample collected from the southwest portion of the Site.

Total petroleum hydrocarbons as diesel (TPH-d) were present at concentrations that exceed the residential human health screening levels, but are below the commercial/industrial screening levels in southwestern portion of the Site, in the same surface soil sample as the SVOCs.

The building materials and some appurtenances (i.e., fluorescent lights and possibly other electrical equipment) in both buildings contain non-friable asbestos-containing material (ACM), lead based paint (LBP), and/or polychlorinated biphenyls (PCBs).

Ethylbenzene and chloroform are present in sub-slab soil gas above the human health screening levels for a residential exposure scenario in the former auto repair shop.

NOTE FROM CRSP REGARDING PHYTOREMEDIATION:  Although the US-EPA did not include any alternatives on  phytoremediation or phytotechnology for rendering soil contaminants harmless to human health in the ABCA, there is additional information on the successful use of various plants, trees, and microorganisms for brownfield soil remediation.  Please learn about them on line at the Center for Creative Land Recycling: http://mailchi.mp/cclr/webinars-07-31-17
or at this website for the International Journal on Phytoremediation“.   It is CRSP’s intent to apply the current US-EPA grant application for the remediation of hazardous materials within the buildings, and to develop a future remediation plan for the soils beneath the currently paved surfaces outside the buildings.

Lots of family-friendly activities are planned along the route.

We will be kicking off CicLAvia Sunday with a press conference at 8:30am at the Broadway HUB (Broadway and 7th St.). Come by to start your day.

CicLAvia is a nonprofit organization, and we couldn’t do what we do without your support.  Let’s keep CicLAvia rolling by making a donation today.

See you this Sunday, Oct. 8th at CicLAvia: Heart of LA! 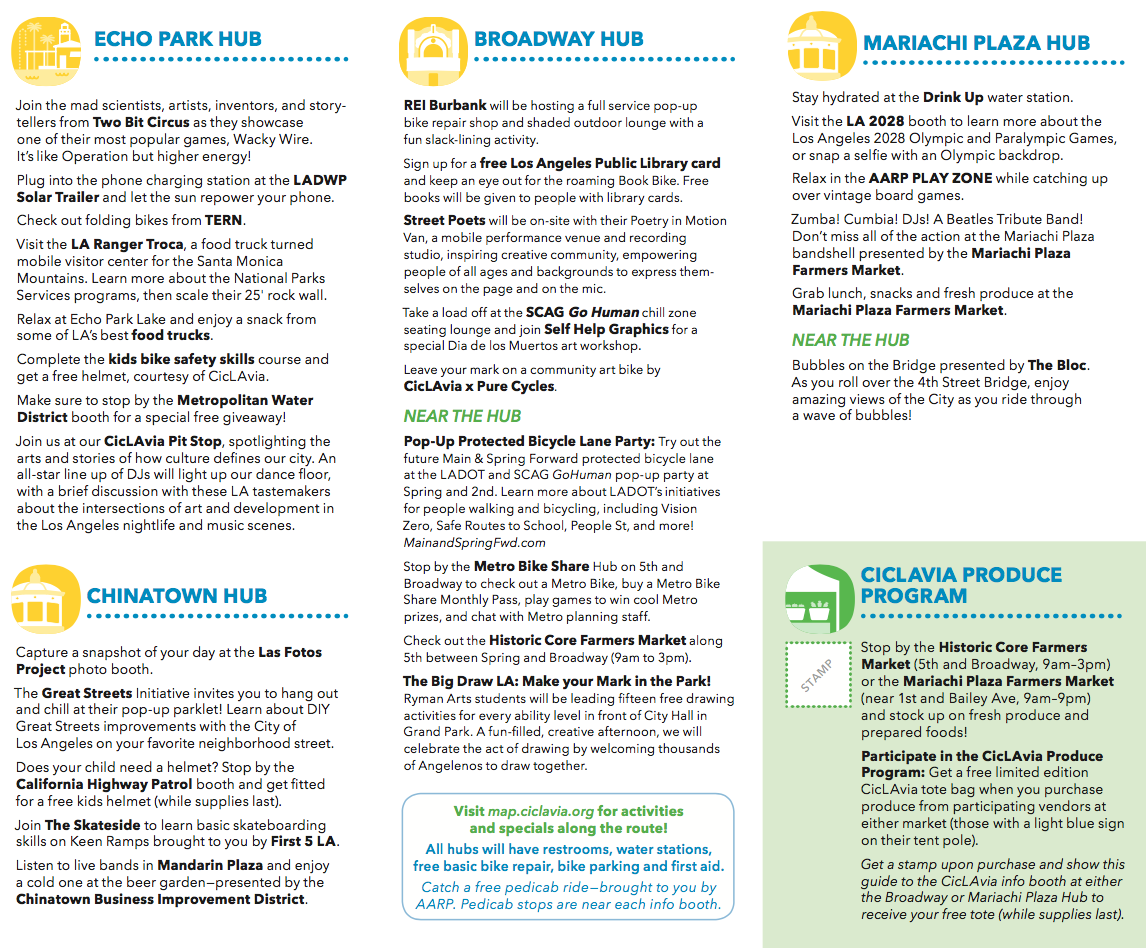 Re-envision your neighborhood through storytelling, objects, art-making and play.  Investigate your attachment to place and shelter by thinking beyond words by building models to express your ideas about  cohousing, intentional community, micro-apartments and tiny homes.

Fee:
$5 to $20 sliding scale: pay at the door with cash or check (or 3 time dollars)
*or  go here to pay electronically

About James Rojas
James is an urban planner, community activist, and artist.  He developed this method to make planning visual, tactile and meaningful. Through this method, he has engaged thousands of people by facilitating over five hundred workshops and building over fifty interactive models around the world.   More about James and the Place It workshops can be found at :
http://www.placeit.org/bio_james_rojas.html
and
http://www.placeit.org/policy_design.html

This event sponsored by CRSP in association with the LATCH Collective and the You Are Here: Los Angeles Intentional Community Meet-Up

Here’s everything you need to know to get ready for June 11:

The Mission of the Beverly-Vermont Community Land Trust is to exercise land stewardship as the basis for creating pedestrian-centered neighborhoods emphasizing affordable housing, work and recreational spaces that are economically and socially sustainable, and that integrate urban living with nature.

The Beverly-Vermont Community Land Trust (BVCLT) is among the leading organizations in Los Angeles specializing in permanently affordable sustainable housing for those who are dedicated to a lower impact life style and have limited access to market rate housing (including those with lower wage jobs, on fixed incomes, or with disabilities).

We offer tours to the public usually on Saturday with or without lunch. Reservations are required. For schedule, fees and details, go here: Tours Page
Scroll to top